A highly talented 5-year-old show jumper was referred to us.
The owner had noticed that the horse was increasingly stumbling after 20 minutes of work. In addition, it became more and more difficult for the horse to transition into a right lead gallop.
A palpation revealed that the muscles on the right side exhibited an increased muscle tone.
Therefore a thermal image of the horse was taken.
The result was surprising and relatively clear. 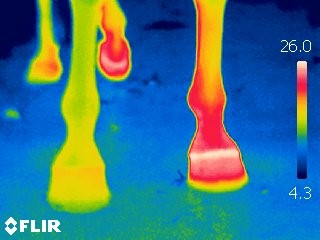 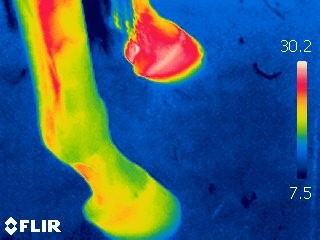 As can clearly be seen from the thermal images, the right limbs were not receiving as much blood circulation as those on the left side.
Therefore the horse was investigated using pulse control with the help of the laser diagnostics.
We discovered that interference fields were present in both the pelvic and neck regions.
These interference fields were removed with the help of laser acupuncture. Afterwards the horse was treated using physiotherapy and osteopathy.
One week later the horse was brought to us again. The owner reported that the problems with stumbling and transitioning into a gallop had reduced after only 2 days.
After 7 days, no more stumbling was noticeable.
At this point, follow-up images were taken. 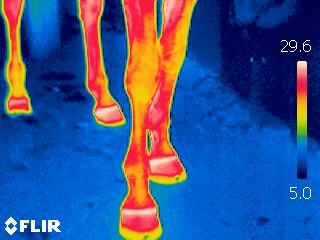 Fig. 3:
Follow-up image 1 week after treatment: Both legs are receiving the same amount of blood circulation. A difference is no longer visible. 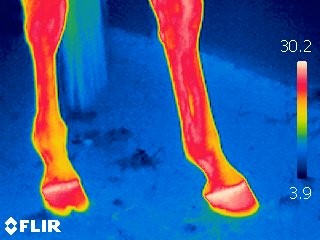 Fig. 4:
From the 2nd perspective there is also no visible difference.

As can clearly be seen in the thermal images, a large difference between the left and right forelegs is no longer visible.
This example clearly demonstrates the importance of thermographic investigation as a diagnostic aid.

Cardiac failure in a horse

A 24-year-old gelding came to us for laser acupuncture. Under his former rider, this horse enjoyed great success in international show jumping. He no longer wanted to start into a trot, let alone a gallop, voluntarily, which was unusual for this horse. An equine clinic was asked to do an investigation. It became apparent that the function of the horse’s cardiac valves was impaired. The veterinary clinic weren’t holding out much hope. The possibility of euthanasia was also considered.

During the acupuncture diagnostic investigation, a hidden interference field was able to be detected at P3. This was removed using the B7 frequency. In addition, the following points He3 /5/9 , KS 3/6, Ma 40, Gb 37, 3E5 and Ni3 were also used for treatment.

An improvement was apparent after only the first treatment. The laser acupuncture was performed with the help of the RAC methods and repeated every 3 days. After the 3rd treatment, the horse wanted to trot and gallop voluntarily again. After the 4th treatment, the veterinary clinic was again asked to perform an investigation. They could no longer detect any abnormal heart murmurs.

The horse’s owner told me that to date the horse has no limitations and regularly frolics around his paddock despite his age.

Another example of what can be achieved using laser acupuncture and RAC methods. 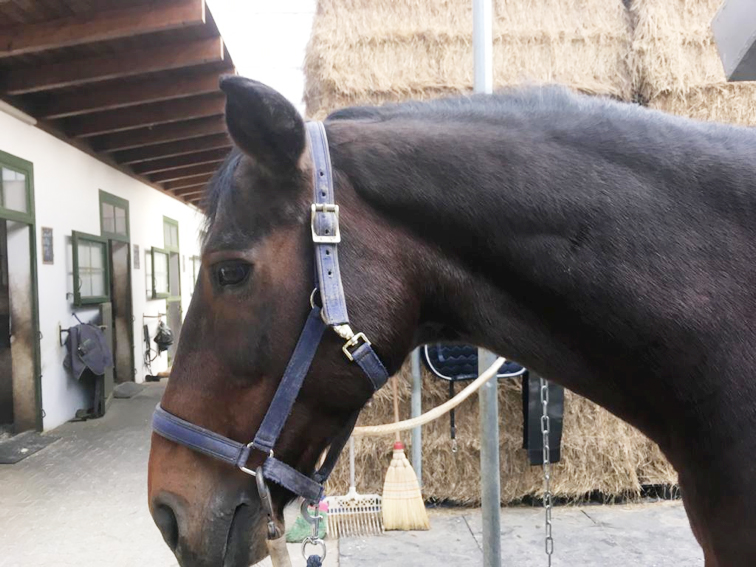 Severe dermatitis of the head area in a horse

This horse came in for acupuncture treatment after 8 weeks of intensive antibiotic and anti-parasite treatment. The owner of the horse was very unhappy with the condition of the wound. The horse was otherwise in good health overall.

During the acupuncture diagnostic investigation, a hidden tooth interference field was able to be detected on the upper M3. Other points such as Ni7, Di 11 and Le 8 followed.

The skin on the face was also lasered with RAC control using frequency A.

The treatment took place once per week. After only the second treatment, a significant healing process was apparent. After 4 weeks, the skin was completely healed apart from two small spots. After around 5 weeks, the skin on the head had made a full recovery. 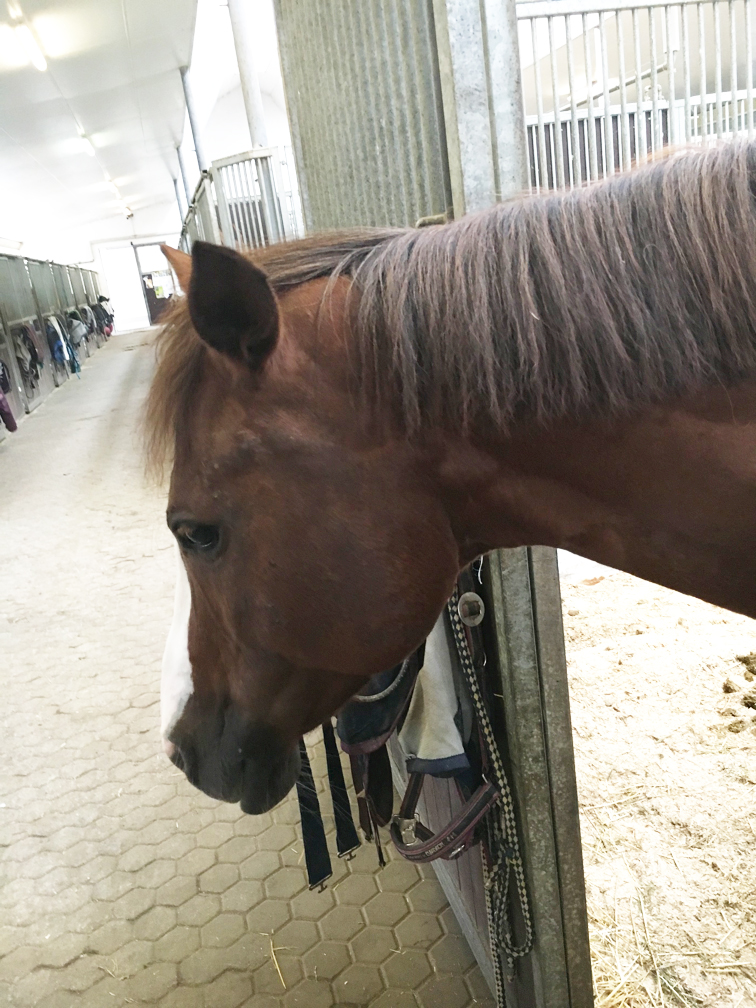 Fig. 2:
After around 5 weeks, the skin on the head had made a full recovery.

A 9-year-old dressage-trained mare was referred to us.

The horse came in from the paddock badly lame. A veterinary clinic was called in and the horse was treated for 1 week with painkillers (Phenylbutazone). However there was no improvement. The horse was then first diagnostically anaesthetised, and subsequently X-rayed. No changes could be detected from this.

An investigation was then carried out using ultrasound. As a result, a strain of the musculus interosseus medius (suspensory ligament) was detected in the upper area. (Images 03.07.18)

The clinic recommended strict rest in the stable and leading on hard grounds with a prognosis of 4-5 months until light work could be taken on again. The next follow-up appointment was scheduled for the 14.08.18.

The laser therapy was started on 15.07.18. In the process, the ligament was lasered locally for 10 minutes using Nogier frequency ‘A’. Gb, St, Kd ,3E und SP were also lasered daily. The horse was led on hard ground for 25 minutes every day.

At the follow-up appointment on 14.08.2018, no further lameness was detected. A second ultrasound investigation revealed an astonishing result. On the new ultrasound images, almost no defect was visible. For my part, the RAC diagnostics had already delivered the same results a week earlier. (Images 14.08.18)

The clinic was very surprised about the fast healing process and could hardly believe the results. The horse was immediately cleared for light work ‒ significantly earlier than the predicted 6 weeks.

This once again clearly proves how effective laser treatment is. Convalescence was able to be shortened by over 50%.